A busy 6 months for the committee and allotment holders. An application was made to the Manchester Airport Community Trust Fund. I think most of us did not hold much hope of a successful application however with much delight we gained funding with a little contribution from the association to buy 2 x 3m x 4m shipping containers.  There was certainly quite a bit of excitement over receiving delivery of these flat pack containers. The original plan was to move them off the road down to the allotments and then rally allotment members to come down a week later to put the units together. The units arrived Thursday (28/06) evening where they were moved on to the car park and a good number of allotment holders came down the following morning with socket sets in hand to construct them. Three hours later the project was more or less completed!

On behalf of Woodley Allotment Association and its Tenants we would like to say a huge thank you to the Manchester Airport Community Trust Fund as without their financial assistance the project would never have been completed. 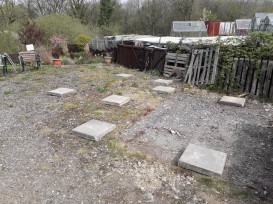 Who wants to break in to allotment sheds? You would be surprised, 15 years ago we never had any form of problems however in the last 10 years break ins have become a serious problem for plot holders. Not only do the thieves cause damage to the shed and steal their contents they have also damaged beyond repair one of the entrance gates. The losses plot holders have incurred has led in to the thousands.  The advice we give to plot holders is to not keep anything of value in their sheds. This advice has been taken and now when we suffer break ins thieves find nothing of value, however their is still the damage to the shed to take care of. Having to ship tools back and forth every time plot holders visit is not only inconvenient it is not that easy for anyone especially our elderly members which is a majority on our site, to move a 50kg rotorvator to the allotment site, never mind the damage it does to the inside of cars in transit. Due to the lack of a secure facility and plot holders not having transport we have sadly lost tenants. The committee have come up with the solution of having a shipping type container which are far more secure than any shed for plot holders, The Alvanley Clinic and the association to keep their tools in. We have approached all the houses surrounding the allotment site to obtain their views on having a container on our site and all have agreed that it is not only a good idea they would be happy to see it there. Shipping type containers are expensive and well beyond the funds the association it is on our wish list and we are hopefully going to get some form of support in purchasing one.

One thing quite often leads to another and this is certainly true in this case. Continuing from the work Civil Engineering firm George Cox have done for the Alvanley Clinic the association was asked if we would like some flags. The paths on our allotment site were in desperate need of attention and with this in mind we accepted them with delight. What we were completely unaware of at the time is the number in which we were being offered and i believe the last count was somewhere close to 1000 flags. Again thanks to the help of committee members and plot holders work began on the paths in February with completion at the end of May. We would like to say a huge thank you to George Cox for making this project happen. In the process we have also managed to extend the life of the used flags which we believe would have ended up in land fill or would have needed to be recycled, so in reality everyone really is a winner. 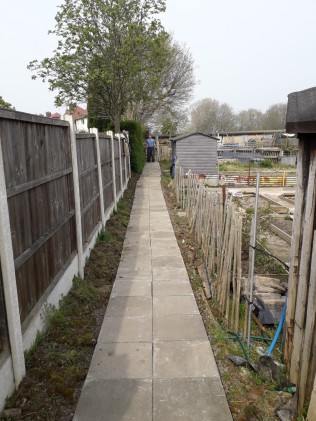 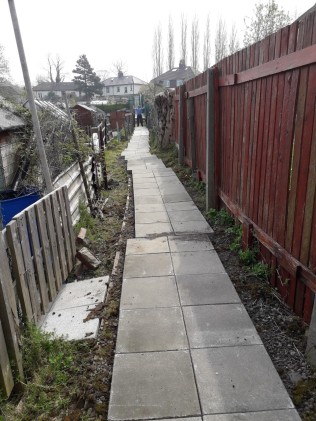 Early 2016 we were approached by the Alanley Clinic to see if we had any allotment space available. An unusual request for us as usually allotments are normally used by members of the community as opposed to a Doctors surgery. However it soon became apparent that the purpose of wanting allotment space was for the well being of their patients from the  local community within their care to come together and to be able to benefit from the enjoyment of the growing cycle. With much surprise by the committee and plot holders of Woodley allotments the Alvanley Clinic with the  grateful help of Civil Engineering company George Cox have transformed what was a barren patch of land to what it is today and the work is not finished yet. Paths have been created to enable abled and disabled people to enjoy the facility along with waste high growing beds. Plans are in progress to install a shed, we believe if the plot is anything to go by this will not be any ordinary allotment shed more of a meeting place for the members or the Alvanley clinic.

The word of this magnificent project has soon spread and the leader of the Liberal Democratic party Vince Cable Mp visited and was mightily impressed. We have been informed that later in 2019 when the work on the Alvanley clinic project has been completed the Mayor of Manchester Andy Burnham will officially open the Alvanley clinic allotment plot.

It is with thanks to allotment members and committee who came together to start the project at the beginning of February 2016 to remove overgrowth and trees to expose the underlying terrain. Several tonnes of rubbish were also removed in the process. Once cleared, work was undertaken to turn over the existing soil and again in the process remove unwanted rubbish. This work has enabled us to establish new plots and space for the Alvanley Clinic project. Also due to the poor state of the gate and entrance at the Woodlands drive entrance Stockport Metropolitan Borough Council installed a new gate. New plot members are now in situ and are seeing the fruits of their labours annually. 2019 has seen the continuation of improvements to this area with the supply of a large quantity of flags from a local civil engineering company. These flags are currently being laid for new paths by allotment members.

The allotment site was up to April 2012 managed by Stockport Metropolitan Borough Council when the plot holder agreed to form an Allotment Association. The Association and the lease was signed by the trustees with Stockport Council on the 18th April 2012.

On taking control of the allotment site the Associations Committee undertook a full review of the site developing a Regeneration Plan. This established a programme of work (reinstating the access paths round the site, tidying up the area, cutting down and removing trees/weeds/brambles, extending the site water system and a number of major projects) to steadily make improvements over a period of time to the allotment site. Two of the projects were to restore the main entrance and car park and create Community Green Space Area for the members and visitors.

The committee reviewed the work involved with the car park extension and due to the amount of materials involved and the requirement of heavy plant and equipment it was agreed we required a specialise contractor to complete the project. Some funding for this project came from Association funds but a substantial amount came via a grant from Forever Manchester.
After discussions with perspective contractors the Association committee placed the order to carry out the works with Palmer Demolition and the main entrance and extended car park were completed March 2013. The Committee, on a section of the car park constructed 3 new storage bays for deliveries of compost and other materials.
To give you indication of the work involved the materials used; after the area was cleared and the levels established 180 tonnes of crunched brick were delivered and rolled this was followed by 140 tonnes of hard core and to finish 40 tonnes of road plannings.
The car park is now easier and safer on arriving or when leaving. It also affords good access for deliveries of compost and manure. 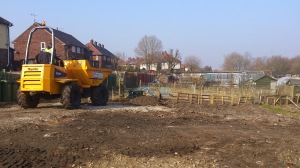 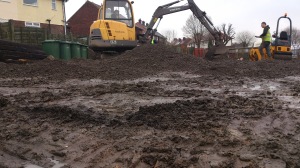 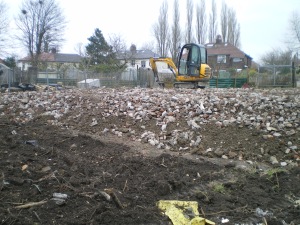 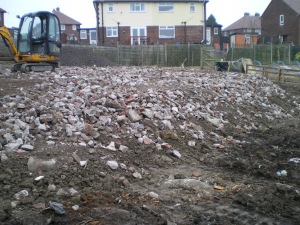 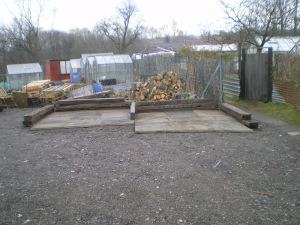 With the completion of the car park the committee turned its attention to the Community Green Space. With donation from Mr Palmer of 150ft of wooden fencing, 40 off 3×2 concrete flags and a number of road kerb blocks. To purchase further materials to construct this area we were also fortunate to obtain a grant from the Area Flexibility Grant Fund. With the funding in place along with the donations from Association members the work started on the Community Green Space Area.

The work on the area commenced in April 2013 and was completed in October 2013 and all the work was completed by Associations members. The area is fenced off at the top of the Dell (a safety requirement) and down each side of the area, there are three raised beds that have been allocated to plot holders children to cultivate, a wild flower meadow with six fruit trees, an access ramp, with flower beds on each side and at the bottom, flagged paths round the area and we have planted 500 spring flowering bulbs.

There are picnic tables; a barbeque and gazebo are also available. The committee’s intention is to have colour in the area all year round, at the start of the year spring flowering bulbs and blossom on the fruit trees. In the summer we have the flower beds on each side of the ramp and at the bottom and hopefully veg growing in the raised beds. In the late summer and autumn there will be the wild flower meadow, hopefully fruit from the trees and we have also planted wild flower meadow seed on the bank that divides the car park from the community area. This year in commemoration of the First Wold War Flanders Poppies were also planted on the bank. 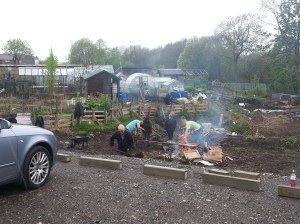 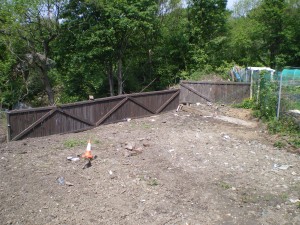 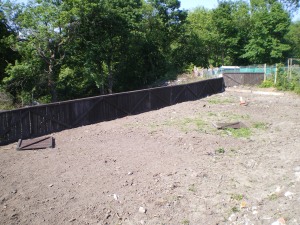 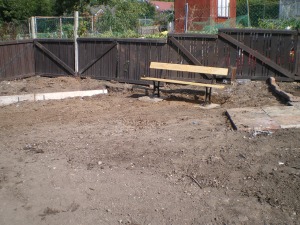 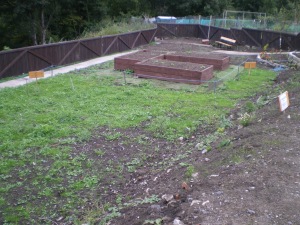